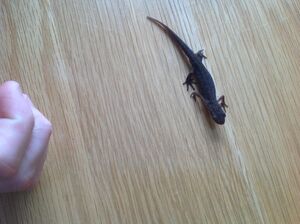 Why Considered as an Amphibious FISH?Edit

Eels: Some eels, such as the European eel and the American eel, can live for an extended time out of water and can crawl on land if the soil is moist. Although neither reptile or amphibian due to its amphibious simularities it deserves a place on this site just like all other amphibious fish

Much of the European eel’s life history was a mystery for centuries, as fishermen never caught anything they could identify as a young eel. Research in the 19th and 20th centuries shed some light on the subject, though questions remain. They are generally believed to spawn in the Sargasso Sea, after which the adult eels die. The larvae (Leptocephalus) drift towards Europe in a three-hundred-day migration. When approaching the European coast, the larvae metamorphose into a transparent larval stage called "glass eel", enter estuaries and start migrating upstream. After entering fresh water, the glass eels metamorphose into elvers, miniature versions of the adult eels. As the eel grows, it becomes known as a "yellow eel" due to the brownish-yellow color of their sides and belly. After 5–20 years in fresh water, the eels become sexually mature, their eyes grow larger, their flanks become silver and belly white in color. In this stage the eels are known as "silver eels", and they begin their migration back to the Sargasso sea to spawn.

The European Eel is a critically endangered species. Since the 1970s, the numbers of eels reaching Europe is thought to have declined by around 90% (possibly even 98%). Contributing factors include overfishing, parasites such as Anguillicola crassus, barriers to migration such as hydroelectric plants, and natural changes in the North Atlantic oscillation, Gulf Stream and the North Atlantic drift. Recent work suggests that PCBpollution may be a factor in the decline.

Eels have been important sources of food both as adults (including the famous jellied eels of East London) and as glass eels. Glass eel fishing using basket traps has been of significant economic value in many river estuaries on the western seaboard of Europe.

For quite some time, the population number of European eels has been falling. For this reason, a research project has been started by Innovatie Netwerk, led by Henk Huizing to see whether it is possible to breed European eels in captivity. The breeding of European eel is very difficult, since eel is generally only able to reproduce after having swum a distance of 6,500 kilometres (4,000 mi). In the project, this is being simulated by means of a hometrainer for the fish. Innovatie Netwerk has also started a breeding project, called InnoFisk Volendam.

Retrieved from "https://the-british-reptiles-and-amphibians.fandom.com/wiki/European_Eel?oldid=4738"
Community content is available under CC-BY-SA unless otherwise noted.