Start a Wiki
The Dice Snake (Natrix tessellata) is a European nonvenomous snake belonging to the family Colubridae, subfamily Natricinae.

Females are bigger than males. Maximum size is between 1.0-1.3 m (39-51 inches) long. The color may vary from greyish green to brownish or almost black, with dark spots on the back. The belly is sometimes vividly coloured in yellow or orange, with black spots, very similar to dice, hence the name.

Living mainly near river streams or lakes, it frequently on fish. Sometimes it feeds also on amphibians like frogs, toads and tadpoles.

This snake is not venomous. As a defense it spreads a very bad smelling secretion from its cloaca. Another defence mechanism is thanatosis, that meaning the snake is playing dead.

During the mating season (March-April-May) they congregate in large groups. Egg laying is usually in July and one clutch consists of 10-30 eggs. The young snakes hatch in early September.

Dice snakes hibernate from October to April in dry holes near the water .

One of the most numerous population lives in the vicinity of the ruins of Histria, in Dobrogea region, Romania. This population has been recently discovered to be threatened by a parasitic nematode, namely Eustrongylides. Since 2005, the population from Histria has been in researchers' attention. The Tessellata project, a joint Romanian-Swedish-Czech research program, is focused on population biology studies and parasitic threats of this unique costal population.

The dice snake is found throughout Europe and Asia: Lebanon, Israel, Germany, Switzerland, Austria, France, Croatia, Slovenia, Bosnia and Herzegovina, Montenegro, Republic of Macedonia, Serbia, Italy, Czech Republic, Slovakia, Poland, Albania, Romania, Bulgaria, Hungary, Turkey, Greece, Cyprus, Afghanistan, Russia, Ukraine, Armenia, Georgia, Azerbaijan, Kazakhstan, Turkmenistan, Tajikistan, Uzbekistan, Kyrgyzstan, Iraq, Syria, Jordan, Yemen, Egypt, Pakistan, China. These snakes have also been introduced accidently through out Britain from escapes from zoo's, and there are thought to be about 40-60 breading pairs although no exact number has been calculated. Some areas where they have bred are in and around Dorset and an area in London near by where the aesculapian snakes have also starting a population. 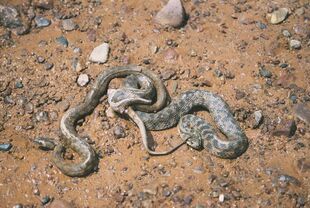 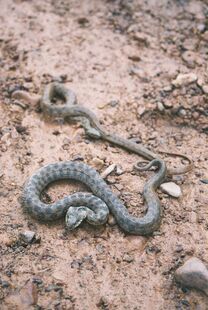 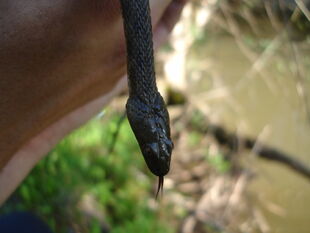 -wikipedia
Add a photo to this gallery
Retrieved from "https://the-british-reptiles-and-amphibians.fandom.com/wiki/Dice_Snake?oldid=5707"
Community content is available under CC-BY-SA unless otherwise noted.