Start a Wiki
The Aesculapian Snake (Elaphe longissima) is a nonvenomous snake native to Europe.

They hatch at around 30 cm (11.8 in) and average at around 110 cm (43.3 in) but can grow up to 200 cm (78.7 in). They are dark, long, slender, and shiny. Juveniles can easily be confused with juvenile Grass snakes, also having a yellow collar on their neck. Juveniles are light green or brownish-green with various darker patterns along the flanks and on their back. They appear to have two darker patches in the form of lines running on the top of the flanks. Adults are much more uniform, sometimes being olive-yellow, brownish-green, sometimes almost black. When they have a pale color, sometimes two darker lines can be visible, but if their body color is dark, they usually have white freckles all over their body. Their belly is yellow. With unmisable dark patches

Their main food source are rodents. They also eat lizards and sometimes bird eggs as well as birds. They constrict their prey. Juveniles eat mainly lizards.

They can be rather tame, confident that their coloration will keep them hidden within their natural environment. They usually disappear and hide, but if cornered they may sometimes stand their ground and try to intimidate their opponent, sometimes with a chewing-like movement of the mouth and occasionally biting. They are active by day. In the warmer months of the year, they come out in late afternoon or early morning. They are very good climbers.

Breeding occurs when the snakes wake up from hibernation in spring, a week after, they are all looking for each other and mating begins. After only a few weeks about 15 eggs are laid (extremes are from 9 to 20 eggs) in a moist, warm spot, usually under hay piles, in rotting wood piles and other places of this kind. The eggs incubate for around 10 weeks before hatching

Found over most of France except in the north, the Spanish Pyrenees and the eastern side of the Spanish northern coast, Italy (except the south and Sicily), the Balkan peninsula and parts of Switzerland and Austria. Some isolated populations in western Germany and in the northwest of the Czech Republic.

Introduction to the UK

Present only in an around the grounds of the Welsh mountain zoo, Colwyn Bay, from where it escaped. This as the story goes happened in the 1960's where one gravid female escaped and the population has all come from this one source. The population is well over 100 individuals and they are found upto 0.5 miles from the zoo. Another smaller population (approx 30) is established in the London zoo area. 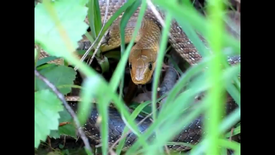 Aesculapian Snake In Wales by snakes1000000 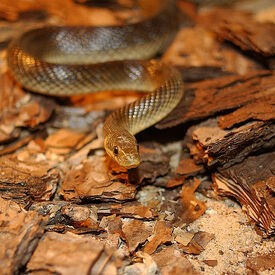 Aesculapian Snake-Wikipedia
Add a photo to this gallery

Retrieved from "https://the-british-reptiles-and-amphibians.fandom.com/wiki/Aesculapian_Snake?oldid=5761"
Community content is available under CC-BY-SA unless otherwise noted.